I was Abandoned, Now I'm Found! 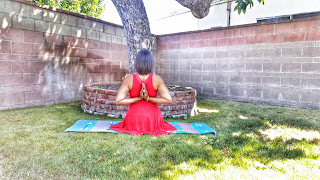 On the 3rd day of the challenge, we were asked to write about a story we've been telling over and over, which no longer serves me. At first it was hard, I had nothing that came to mind. So, I procrastinated until the 4th day, which is today for another 45 minutes.

As a Yogi, telling a new story is something I was taught. Spiritual training requires that you tell a new story, a better story, one that uplifts not only spirit, but body and mind as well. Yet, I still could not dig deep until I read the prompt again, 15 minutes ago. That's when it hit me. The story I've been telling since I was old enough to talk about it.

You see the prompt suggested writing about someone who hurt you, or a relationship that didn’t work out.

Here's the story I tell -

I am an abandoned child.

My father left me (& my Mother) when I was 4 years old. I guess I'm a shitty person because my own Dad didn't love me enough to raise me. Instead he left my Mom, sister and I to go an raise another family. He went on and raised 3 kids, that weren't his own flesh and blood. (Bitter much?) I can't even explain the level of rejection I have felt most of my life, at least until my late 20's. Yoga helped me see things so differently, clearly.

I realized my Dad's decision to leave had nothing to do with me, and it said more about his cowardice than my pain, which I self inflicted. I realized he was human, and lost. I realized I chose him to be my Dad - so that the experience and pain would be so intense, I'd seek out healing modalities to help my broken heart. I realized suffering was optional, and boy was I attached to my pain. I had the tendency to need approval, to be liked, accepted, wanted. All of that propelled me towards Yoga and the healing community, because I was desperate. I was tired of being a victim. I was tired of that story. I wanted to be the survivor, the warrior who conquered, the Shero.

It was not easy.

I get flashback emotional pain - even after forgiving him and myself.

My (new) story is of understanding parents are human, and make mistakes (which helps me with my 3 daughters because I don't want them to think of me as perfect. Ever).

A story of realization - I am supported and loved by the Universe - no matter who my parents are - I'm always being cared for.
You see, I realized that the power was within me, from the very beginning.

I realized that self love was more important than anything else.

I realized once I started loving myself, I didn't need anyone else to do it for me.

I realized this world is all Maya (illusion) and we choose to perceive it any way we want to, all it takes is focus.

I was the spark. I was the transformer - I still am!

While it may seem strange to think the relationship with my Dad didn’t work out, it is a truth many children face.

I am consciously aware of the advancement I have made due to feeling abandoned, and know I was never truly abandoned.

Now I look forward to advancing, with a knowing I was found, to be a pioneer of healing for others.

For that, I'm grateful.

Namaste
Posted by Elizabeth Peregrina at 12:09 AM