How Mantra Helps the Downward Spiral 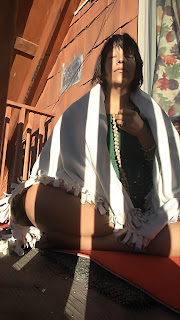 Wikipedia defines the Sanskrit term as the "meditative repetition of a mantra or a divine name. It is a practice found in Buddhism, Hinduism, Jainism and Sikhism.

The mantra or name may be spoken softly, enough for the practitioner to hear it, or it may be spoken within the reciter's mind. Japa may be performed while sitting in a meditation posture, while performing other activities, or as part of formal worship in group settings."

"A Mantra being "a sacred utterance, a numinous sound, a syllable, word or phonemes, or group of words in Sanskrit believed to have psychological and spiritual powers. The earliest mantras were composed in Vedic Sanskrit by Hindus in India, and are at least 3000 years old".

A mala is a string of beads, which is used to chant the names of God. It is similar to a rosary. A mala typically has either 108 beads (a sacred number in Hinduism) or 27 beads (which is one-fourth of 108). Additionally, the mala generally has an additional bead, called the “Guru bead,” which hangs at the connecting points of the mala.

A Hindu mala is used by the right hand, generally. The mala is held with the thumb and middle finger, avoiding the index finger. The index finger represents the Ego. The right hand, and the beads are brought toward you, one by one, using the thumb. Each bead counts as one repetition of your mantra. When you get around to the Guru bead, you don’t count it, and you don’t pass it; you stop there, mentally bow to the guru.

This process is called Japamala.

If your mala is 27 beads long, you will flip the mala around, and start going back the other way, 3 more times. Each time you come to the guru bead you awaken once more, then you turn around and head back home, until you hit 108.


Type of mala is up to you. There are so many options out there! My first piece of advice is to get them from a good source.

What does that mean?

Try and get them from a correct lineage, such as SRF (Self-Ralization Fellowship) or the Hare Krshna Temple. Most of my malas come from a Temple. I like that they come infused with good vibrations and prayers via the hands which made them.

After discovering the perfect mala, for you, it's time to find a mantra. Quite honestly, the mantra finds you. So don't give up if you aren't resonating with one, make it up. I did.

My first mantra was, "I am happy, healthy, wealthy and wise".

After that, I found my mantra, and many others! Traditionally, the mantra is given to you by your Guru (Teacher) when initiated into Bramachary.

But the mantra can also come by way of a song, or meme, or conversation.

We should not limit how we receive God, but focus on staying open, and accept the message.

My mantra depends on my situation, but primarily it goes between "Om Namo Narayanaya" and "Om Namah Shivaya".

These are both names for God.

My first Hindu mantra ever was a Maha Mantra, a great mantra. The Krshna mantra, is powerful mantra in guiding love into your own being, evolving Self love within, expanding one's being to unbelievable heights.

I found my spouse while chanting to Krshna.

I chant my mantra. I cling to it, like a man climbing rocks who just had a slip of hand.

I chant louder than the thoughts.

I usually use my mala for morning and evening prayer, but I always have them with me.

That's how powerful they are for me.

Just like with everything else, it's all experimental. Listen to what resonates within. It's always ok to say no, "this is not for me".

Remember to use your breath, deeply.

Namaste
Posted by Elizabeth Peregrina at 7:41 AM